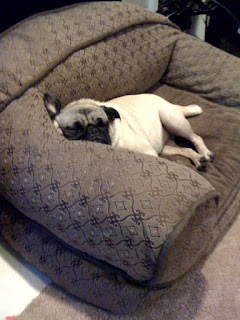 Isn't my little baby precious on her very own sofa! If you're new to my blog, just a little FYI, my Puggy is like MY BABY seriously. I talk to her, hug her, rock her, kiss her, talk to her, carry her around, buy her clothes, buy her treats, snuggle with her, and I could go on and on. Also, another FYI, LC HATES my dog. Yes, he and "Pugzilla", as he refers to her, have a love/hate relationship. We've gone over how she gets on the sofa and has a dance party in LC's spot leaving evidence such as her little paw prints and a mound of fur behind, but the rest of the couch is clean. He hates that she snores, snorts, and makes this weird sound. Literally, I just tried to type out the sound, and I can't do it. Well on to the point, LC took beautiful Puggy out for her walk the other night and returned with Gimp Puggy. He says she jumped off the curb near our dumpster which is a tad higher than the normal sidewalk curb. She is now limping. Her front left leg/ankle is sprained we think. I hope it's not broke. She's not yelping in pain when I touch her leg, and she walks on it. However, she doesn't put much pressure on it at all, and she's just hobbling around. If she's not better by Saturday, I'm going to have to have my Daddy take her to the vet since I have my JL retreat. She's not feeling well poor thing; so, keep her in your thoughts and prayers this week!
Posted by SouthernBelleJM at 4:24 PM

Poor baby. Check her paw for foreign objects. She might have something stuck. Sharon

What a precious baby! I am the same way with Lucky, but I think Thomas is even worse! He keeps talking about once we are married that he is going to lay in bed and watch movies with Lucky while they eat chips together. He is nearly human that dog! I hope that Puggy gets better! Keep me updated on what goes on with her leg! Poor baby! I'm praying!

Oh...I am SO sorry - When my 'baby' hurts...I hurt too. We have a pug in the family (not me personally) and his name is Winston!! I could just eat him up with those crazy eyes!

Awful, I cannot stanf for animals to be in pain.

Hope she gets to feeling better! Poor thing :(

Oh, poor Puggy! That is the sweetest picture! Oscar has a similar couch (but in XL size).

I know exactly how you feel because he is my "child", too and I get extremely upset anytime he's hurt or doesn't feel well (in fact I'm taking him to the vet today for an ear infection).

Praying for Puggy that her little paw is better!

Poor little thing! She is just the cutest!!! I hope she is much better very soon!

I check my puppy all the time, and I swear the vet knows me too well. I'm in there all the time!

Oh, I hope she is better by the time you see this Miss Belle! Just like your little one, this can be tough for our Tilly, it seems she is constantly stepping on things and getting them stuck on/in her paw, but she doesn't like to let us look in her paws, it is the worst sometimes.

BTW, LC is pretty funny with the "pugzilla" moniker, and we are in love with her sofa, she looks so darn cute on it!

Hope you two have a good weekend and she is healed, happy as can be. :)

Awwww this breaks my heart! Me and my Magnis May have that kind of love/hate relationship....I love her, but I hate that she sheds :) My husband on the other hand is much like you. Oddly, he is the one who hugs her and snuggles with her...she literally whimpers when he is away at night :) It is too cute! I hope she feels better soon!