We arrived in St. Louis around midnight on Saturday. We just chilled watched some tv and got some Zs in order to get up and enjoy a full day on Sunday. Sunday morning, we ate breakfast at the hotel, met a friend of mine at the Galleria mall for some shopping, and had lunch in the mall. Afterwards, we headed out to The Loop which is a cool artsy, fartsy type area kinda like the Cooper-Young district in my home town. We hit up all the boutiques. They have a big second hand store, I don't remember the new name, it used to be called Rag-O-Rama. Well, I scored two cute finds. A light pea green Lacoste polo, and a near almost new Lacoste black, sleeveless polo shirt dress! Both items were 42 bucks. Not bad!

Later on, we went to the Pete Yorn show at The Pageant in The Loop. I must say this was the lamest crowd ever. No yelling, dancing, singing, NOTHING. I mean really people you're at a concert enjoy it. My friends and I were singing and yelling and just had a great time. At one point, Pete says he's about to play a song that he hasn't played in awhile but has had a lot of requests for. He starts strumming a few chords, and I yell out Burrito and start singing the first line of the song. Yes, people looked at me like I was crazy. I don't care. And, thank goodness, it was actually Burrito or I would have looked real dumb. I knew it was anyways. We had sooooo much fun. After the band left the stage, people were asking for set lists. I asked and was told there were no more:( But a few seconds later, the guy was like "Hey, you can have this one. I found one more". And much to my surprise, it was Pete's personal set list. It had all his notes on there. How freaking awesome is that...but wait don't quit reading, there's more awesomeness to my story!!!! We went out back and waited by the tour bus; because, believe me, I was going to get that bad boy signed. He came out a few minutes later and as he was walking by I was like Pete will you sign my set list?!?!?!? He glanced at me and said NO! I must have had that how dare you say no to me because nobody tells Belle no, and he takes a few steps and looks at me and says, "Ha, I'm just kidding. Of course, I'll sign your set list." He comes to sign it, and he's like "you have my set list. cool." Of course, I go in for the kill and ask for the groupie photo op to which me much obliges me=) And my "happy"meaning rather intoxicated best friend taking the photo proclaims "Y'all look marriage material" and before I was completely mortified he responded, "You were the best dancer of the night". Sweet, my favorite musician not only humored me with autographs, conversation, and a cheesy photo op but also noticed me in the crowdprobably because I was the only person acting like a love struck 16 year old going to see my version of Jesse McCartney. 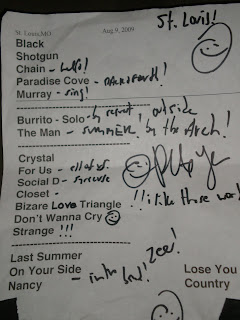 The next day, we did some touristy stuff like the Arch and had dessert at the Lemp Mansion which is supposedly one of the ten most haunted places in America. 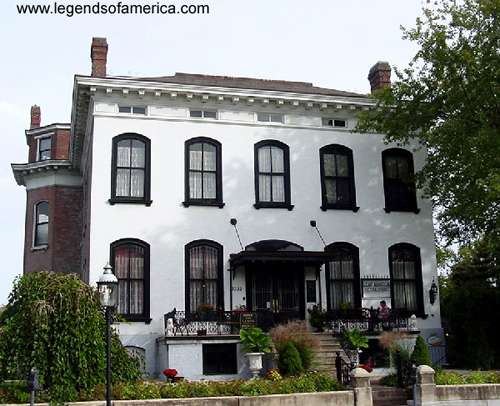 Posted by SouthernBelleJM at 3:32 PM

Your weekend sounds so fun! It's awesome that you got his set list (and autographed, and talked to him!). I am a huge Conan O'Brien fan (weird, I know), but when I went to his show in NYC, I got to sit in the front row and he came into the audience and growled/purred at me! That sounds weird if you've never seen his show, I guess!

Anyway, thanks for your comments on my post and it would be so great to go to some fun events with some new people!

That's really cool!! What a great memento to have.

Sounds like you had a blast! And I hate it when people don't enjoy concerts. I don't get why you wouldn't dance & sing your heart out.

wow, that is cool. Sounds like a wonderful weekend!

I can't believe you got his personal set list. HOLY COW. That's so amazing. I'm glad you were singing and dancing and being a great fan! That's what we need more of, yay! Sounds like a great time overall!

Just realized you were another TN girl! Always love to meet them! Stop by and lets chat sometime! =)

I am a huge Conan O'Brien fan (weird, I know), but when I went to his show in NYC, I got to sit in the front row and he came into the audience and growled/purred at me