Wow, I must say what a weekend it was!!!!! I spent Friday night packing for my Saturday, birthday trip to Nashville. Technically, my birthday isn't until Friday, i'm still in my twenties...yay!!!!!!!! and since a couple of my girlfriends have children, this past weekend worked out best to celebrate a girls trip for my thirtieth.

We headed out that morning, and we stopped for breakfast at Loretta Lynn's County Kitchen. I had the biscuits and gravy. They were darn good. NOM NOM NOM. I'm not a huge breakfast person. While eating breakfast with my BFF and her little sis, I found out BFF is pregnant with her second child. I was so thrilled for her. She's close to two months along and had been waiting to tell me. She hasn't told anyone but her family since she's not far enough along yet, but she asked ME to be the Godmother. And, I must say that was better than any "present" she could have ever given me!!! I feel extremely honored that my BFF entrusts me with such an amazing role in her child's life. It brought tears to my eyes, and I feel extremely special:)

Once into Nashville, we head straight to the Opry Mills mall. I was ecstatic there was a BCBG and Banana Republic outlet. I was very good on this trip btw. I purchased this Max and Cleo dress for $39 at BCBG. It still retails on the Nordstrom website for $54. So, not too shabby:)

And, I got this cute, little blouse at the Banana Republic outlet for $15. I couldn't find a picture of it online except from a blog. So here it is. It will be tres cute paired with my work pants and a cardi. 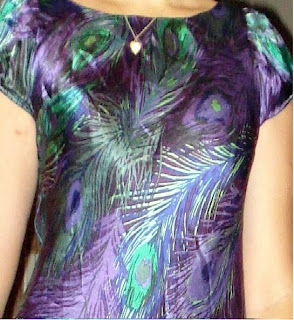 My girlfriends got me a slice of strawberry cake from Lydia's in Nashville, my pink Nike vomeros, makeup, and I was given the opportunity to be a Godmother. It was THE best birthday I've ever had:) Just being with all my friends, old and new, was one of the best presents of all (with the Godmother exception-because that just totally ROCKS).
After dinner, we headed to Broadway Street downtown and ended up at Paradise Park and sang the "Chicken Fried" song by The Zac Brown Band at the top of our lungs among others. Afterwards, we headed to Decades. It was so much fun just dancing and singing anything from NSync and the Backstreet Boys to Journey and The Outfield. "Josie's on a vacation far away......." "It's gonna be me....." Okay, I'll stop. It was so much fun:)

And afterwards, we went back to one of my girlfriend's houses off of 21st and kept on with the festivities. Needless to say, I am not a young, college student anymore. Going to bed at 5am and waking up at 10am not feeling so hot is not a way to start the day. It's now, Wednesday, and I am barely recovered. I don't think I'll be doing that for another 6 months to a year. LOL!!!
Posted by SouthernBelleJM at 2:54 PM

So glad you had fun in Nashville!!! Sounds like a perfect birthday celebration to me, and I agree the BCBG outlet is a must for me on a lot of occasions, too

Yay! I am so glad you had such a great B-Day... I'm seriously going to check our BCBG for some new max and cleo duds, I haven't been expecting them at the outlet!

Love that dress, so gorgeous!

Glad it was such a good time! What's the plan for the friday? Any Oo la la dinner plans or the such from LC?

I work no less than 3 minutes from Opry Mills and somehow it has escaped me that there is a BCBG outlet? I should stop avoiding that place...

And PS - I always get the biscuits and peach preserves at Cabana. So yum!!

So much fun! You'll have to do a write-up on the Nike shoes and let me know how they work out. I'm interested in them!

So glad you had fun! Happy birthday! :) I love Nashville!

What a fun, wonderful weekend! And congratulations to your BFF :-) You'll be an awesome godmother!

How fun! Glad you had a blast--minus the long recovery part ; )

Glad I stumbled across your blog!

I have that purple BR shirt, and I love it. I wear it to work a lot! You are going to love it! Sounds like you had a fantastic weekend!

It sounds like y'all had a fun time in Nashville! Love your shopping finds!!! Happy Birthday!!