I live about 40 from my parents, so I don't see them as often as I should. My mum is a huge country fan, and we went to Tunica this past weekend to the Delta Country Jam.

We got in late Friday night and did a little gambling. Woke up the next morning to realize that my mum had not brought a long sleeve top. We knew it was going to rain and would probably cool down afterwards. A long sleeve sweater or light jacket was necessary! So, we got up and went to the Old Navy Outlet which resulted in the Hello Gorgeous tee I posted about yesterday. So cute! And I even liked the sweater mums picked out for herself that I ended up getting one too! I think the sequin elbow patches are what sold me on it. 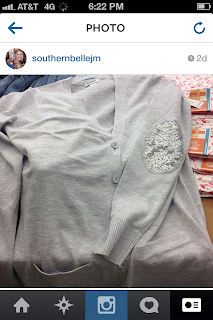 That night was a little warm, but then it poured. Then, it would stop. Then, it would pour some more. Luckily, we had VIP wristbands and sat under a tent in chairs to watch the show. I'm so glad because I would have gotten drenched and ended up sick. After the rain stopped, it was very cool. So, my mum's new sweater came in handy:)

Then, I got to thinking. I think it was Classy Fab Sarah who posted once about wishing she had taken more pictures with her mom. That the hair, makeup, and all that doesn't matter. Memories are what lasts! So, even though I had huge hair i'm not talking texas big hair. i'm talking frizz ball from the humidity my mum and I took a pic. We were having such a good time! Why not capture the moment:) 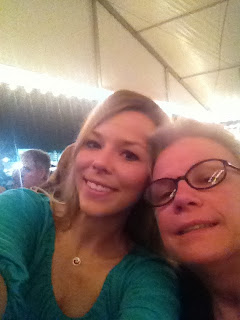 She'll probably kill me for posting this pic. LOL. But, I think she only pops on here every now again. ha!

I'm not a huge country music fan. I like more of the mainstream  country music like Carrie Underwood, Eric Church, and Florida-Georgia Line. We ended up seeing Kelli Pickler. She was adorable and gave such a great performance. Next was Brantley Gilbert. I knew a few of his songs. Last, Tim McGraw. I don't want to use the word disappointed. He put on a good show and can sing, but as I talked about on twitter, I think he just sounds a *tad* better on my radio than live. [don't kill me. just being honest]

After the show, the golf cart took us back to the casino yes you read that right. golf cart. better than walking through the mud in flip flops

The casino handed out $15 vouchers at the tent, not to mention we found out that if you showed the clerk your wristband, the casino gave you an extra $50. So, I'm being frugal and spent the casino's money and half of my own. Which means I brought $$$ back.

Posted by southernbellejm at 6:33 PM

I almost skimmed through this post because I'm supposed to be running into work and blah blah but hey, that's ME you were talking about. I'm so glad you decided to take the picture. It's perfect!