Not literally, but still I digress....I have been sans technology for an official week now. No joke. Just Iphones. LC even joked about not getting tv or internet; because, we have our phones. Yeah, that's not happening. We have an appointment with the cable company on Wednesday no, not the EVIL cable company thank goodness! That will make a week and a half.  I feel like I'm in the Stone Age. I missed my Monday night which  is my F.A.V.E. night out of the week to watch tv. These are the shows I love:

Emmy Award nominated TWO AND A HALF MEN* has been the Number One-rated sitcom on television for the past four seasons. It's a comedy about men, women, sex, dating, divorce, mothers, single parenthood, sibling relations, surrogate families, money and, most importantly, love. More specifically, it's about the lives of two brothers, one brother's son, and the many women who surround them. Charlie Harper is a well-to-do bachelor with a house at the beach, a Mercedes in the garage and an easy way with women. His casual Malibu lifestyle was interrupted when his tightly wound brother, Alan, and Alan's son, Jake, came to stay with him. Complicating matters further are Charlie and Alan's narcissistic, emotionally toxic mother, Evelyn; Alan's deeply neurotic ex-wife, Judith and Charlie's domineering, unapologetically blue-collar housekeeper, Berta. Despite the complexities of their lives and their own strained relationship, Charlie and Alan have one thing in common - they both love Jake and want what's best for him. As a result, they manage to create a little family unit that promises to make each of them a better man. 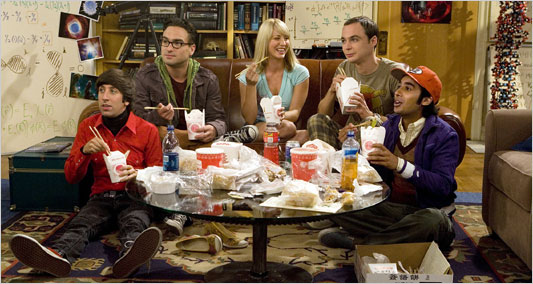 The Big Bang Theory*
Leonard and Sheldon are brilliant physicists, the kind of "beautiful minds" that understand how the universe works. But none of that genius helps them interact with people, especially women. All this begins to change when a free-spirited beauty named Penny moves in next door. Sheldon, Leonard's roommate, is quite content spending his nights playing Klingon Boggle with their socially dysfunctional friends, fellow CalTech scientists Wolowitz and Koothrappali. However, Leonard sees in Penny a whole new universe of possibilities... including love

HOW I MET YOUR MOTHER* is a comedy about Ted and how he fell in love. It all started when Ted's best friend, Marshall, dropped the bombshell that he was going to propose to his longtime girlfriend, Lily, a kindergarten teacher. At that moment, Ted realized that he had better get a move on if he, too, hopes to find true love. Helping him in his quest is his friend Barney, a confirmed bachelor with endless, sometimes outrageous opinions, a penchant for suits and a foolproof way to meet women. When Ted meets Robin, he's sure it's love at first sight, but destiny has something else in store. The series is narrated through flashbacks from the future. 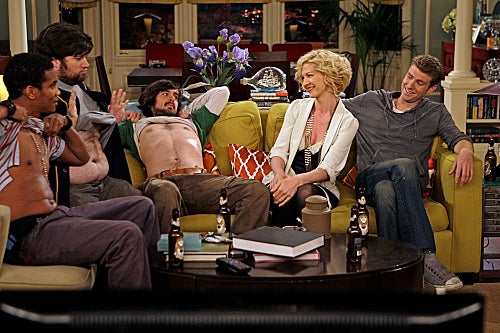 ACCIDENTALLY ON PURPOSE*, based on the bestselling memoir by Mary F. Pols, is a comedy about a single woman, Billie, who finds herself "accidentally" pregnant after a one-night stand with a much younger guy, and decides to keep the baby...and the guy. A newspaper film critic, Billie is barely surviving a humiliating breakup with her charming boss, James, who's still trying to resume their relationship. Pregnant, after a brief fling with her "boy toy" Zack, Billie and Zack make an arrangement to live together platonically. Billie's party girl best friend Olivia, and Abby, her conventional, younger married sister, eagerly look forward to the new addition and offer their own brands of advice and encouragement. But when Zack and his freeloading friends, including Davis, start to turn her place into a frat house, Billie isn't sure if she's living with a boyfriend, a roommate, or if she just has another child to raise.

The shows are all pretty funny! Hopefully, if you haven't checked them out, you will. I laugh til my stomach hurts every Monday=)


*All sitcom summaries are directly from cbs.com
Posted by SouthernBelleJM at 3:50 PM

I don't have an iphone so I would die without cable or the internet. We lost power for two days over the summer and I thought I was going to die.

I curl up on the couch to watch those too.

I love Accidentally On Purpose and HIMYM!

I love accidentally on purpose! It's one of my new favorites!! :)

How I met your mother...one of the best shows on tv!!

Great shows! When I was without my internet a while back I thought I was going to go stir crazy! haha.

I love.love.love your new furniture girl...sorry I have been MIA.

You are too funny, but I can relate :-) I couldn't stand to go without internet (literally every place we have moved, I have made it nearly 100% certain that internet will be hooked up the DAY after we arrive, even if it means delaying our moving date). But we don't have TV and haven't had it for years. I just episodes of some shows online, and that works for me!

I love all of those, too, especially How I Met Your Mother!

Oh my gosh, I've never met anyone other than my sister and I that watch How I met Your Mother....Love that show!

your blog is fun...found you through Jill's real life. Have a great Friday!