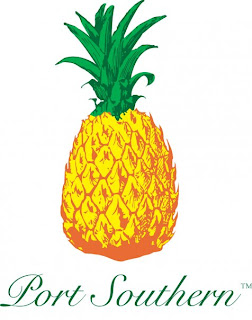 Hey y'all!!!!! Today is a first for this Belle's blog; it's our very first interview! I came in contact with Port Southern and had to check them out, and nonetheless, I was nothing short of impressed. They are a relatively, new small clothing company that is looking to branch out. And, I'm all about helping out our fellow bloggers, small businesses, and Southern businesses get their name out. Steven Beck, one of the founders, was ever so kind to take the time out of his busy schedule to answer a few questions I had and he did not kill me when I flooded his inbox. Without further adieu....

1. What and Who is Port Southern?
Port Southern is a fine style clothing company built around our logo, the pineapple. We promote a classy, Southern style that wants to spread Southern hospitality to others. Port Southern began September 1, 2008 when four friends came together with an instinctual idea and a dream. Steven Beck, Jeremy Hiatt, Nicholas Ruden, and Zachary Moore, all from High Point, NC, kept three important ideals in mind while creating Port Southern:

The four Southern gentlemen developed Port Southern directly from these ideals and stand by their mission to design fine clothing and spread the Southern hospitality their home is known for. While the company is still new, the focus is to create the highest quality polo-style shirt on the finer men's clothing market.

2. Why the pineapple?
Port Southern has the pineapple for its logo because of the true meaning and symbol that the pineapple has. The pineapple is thought to have originated in the inland areas of Brazil and Paraguay. From there, it was widely transplanted and cultivated. Christopher Columbus discovered the pineapple when he stopped in a cove off the coast of Guadalupe, and he introduced the sweet treat to the rest of his homeland.
Pineapples were found to have a yellow pulp that exploded natural sweetness, which made the fruit an item of celebrity and curiosity for royal dining. In Colonial America, the pineapple was placed as the visual keystone at the dining table. Its presence expressed the ultimate level of welcome, hospitality, and good cheer. The South is known for its incredible hospitality, and Port Southern wants to spread Southern hospitality everywhere through the pineapple logo.

3. What designers influence you?
In a great deal, some of our fashion influences have been from our very own homes. The style of Southern class and gentility is something that we have been emerged in ever since we were young gentlemen. Growing up, we grew fond of looking dapper and professional, so we hope to continue this tradition for the future. It's Southern style, flair, and lifestyle that modeled how we design our clothes.
True quality, bright colors, and a professional image is how we gain our inspiration when we design our clothing. These inspirations are something that we want to share all over the United States. We, also, modeled ourselves after a very popular clothing company from the late 1980s called Ruff Hewn. The original Ruff Hewn Clothing Company was, also, from High Point, NC and was very popular for high quality and influential lifestyle.

4. Any plans for a womens line?
We do have plans for a womens line to emerge in the future. Right now, we are working closely on three items for women in the future: sundresses, polo dresses, and womens Southern Hospitality polos. um, I'm SOLD!!!!!
We do also have some small womens items that will be available in the next month when our Spring line releases. These will allow the Southern hospitable women to join in with Port Southern to spread the message of the pineapple.

5. What are y'alls goals for 2010?
(and yes, I can say y'all in an interview. they're Southern, I'm Southern. it's all good!)
Port Southern's goals for the year 2010 are to first get our name out about who we are and what we are trying to accomplish.
While we know the competition is high and there are a lot of great brands in the market, we believe that Port Southern has something special  to offer people from everywhere.

6.  What would be a great "guy" gift a girl can get her beau for Valentine's Day?
A great gift that a girl can get her beau would be a Southern Hospitality polo from Port Southern. Not only would the gentleman get the highest quality polo on today's clothing market, but he could also take part in spreading Southern hospitality that a true gentleman would.

7. What sets Port Southern apart from all its competitors?
Port Southern is a unique brand that holds a lifestyle meaning with it. From the distinct meaning of the pineapple to the deep appreciation that is exhibited and shared for the South. Port Southern is something that our fans and customers can be proud of to actually live and share with others.
Port Southern, also, is proud to have the highest quality polo on the finer men's clothing market of today. An 11.5 ounce heavy knit shirt that is garment washed with fabric softener, double stitching at the seams for lasting design, and a generous fit for comfort . Our keystone Southern Hospitality polo is higher quality than any of the competition.

8. What do Port Southern fans have to look forward to next?
The next thing that Port Southern fans should be on the lookout for is our Spring line. Because we have just begun, we only have a couple items in a couple colors. This will be expanding over the next month when our Spring line is introduced to have more products in more colors.
Also, with the Spring and Summer quickly approaching, Port Southern will be attending a lot of events and will be spreading to more retail locations so that we can get in touch with our fans better.

Well, loves, you've heard it. Sounds like these men are on the right track. Y'all head on over and check out Port Southern's blog.

Have a great weekend darlins and stayed tuned for Monday....something sweet like the pineapple is in store;)
Posted by SouthernBelleJM at 9:47 AM

Mr. Z definitely needs one of their polos...thanks for posting!

I really like the idea of their company, but I'd want to get one in a color other than black or white for Chris. I'll have to keep an eye out for their Spring line!