First off, I love me some Taylor Swift despite that off key duet with Stevie Nicks...seriously. But, I'm on the fence whether or not Lady Gaga should have won album of the year instead. I think they are both amazing artists just from different ends of the music genre spectrum, but still I digress....and Beyonce seriously grabbing your goodies on national television?!?!?!!!?? C'mon. You're better than that. Otherwise, stellar performance; although, I was really hoping to hear "All the Single Ladies". And Fergie, wow. I swear the radio/producer/dj people who work their record magic really do a spectacular job on making her sound like she can sing. Because, last night, I thought her live singing voice was TERRIBLE. Maybe, she and TS were just having an off night. It happens. And the 3D madness, don't even get me started. one word: headache. And pssssh, I most certainly did not get the memo on having 3D glasses to be able to watch the Grammys. Yeah, Grammy tv network, you gotta be better about that one next year. And on to what we really care about....THE OUTFITS!!!!

Of course, my favorite person, LOVE HER!, of the night in both dresses was [insert drumroll here please]: 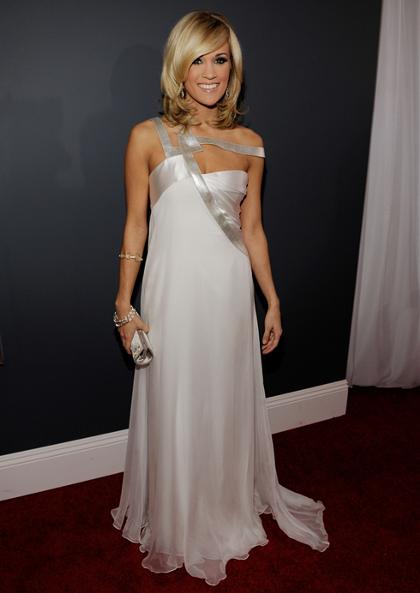 And I know she's wacky, but seriously, I JUST LOVE HER. And her performance with Elton John was phenomenal. You gotta give her that.

And even though, she didn't perform if she did or was a presenter, i missed it my other fave girl, what was she THINKING?!?!?!

Brit Brit, we've been through thick and thin. I'm so happy you finally became sane again and made a comeback. Now, it's time to ask Daddy to allot a little extra $$ for a stylist next Grammy go around. Sheesh, or at least, call a sista and ask her what she thinks. No friend in her right mind would have let you out of the house like that....Just sayin'.

Don't forget to enter my Valentine's Day giveaway from Port Southern (you could win your beau a cute polo;)
Posted by SouthernBelleJM at 3:18 PM

Britney's outfit totally broke my heart. What is the deal with that girl? Sigh. Thanks for sharing pics - I didn't watch last night so I'm hunting down photos all over the web!

I think Britney thought she had returned to 2002 when she could pull something like that off before she had 2 kids.

Lady Gaga and Elton John were amazing. I was hoping, wishing that Beyonce was gonna break out some Single Ladies!!

i am, of course, OBSESSED with the ga. i don't care what anyone says or what a freak she is. i love her!!!

Amber @ A Little Pink in the Cornfields said...

I LOVE Carrie Underwood's style! Everything she wears get a thumbs up from me! (I think she'd look good in a paper bag though! Jealous!

I'm guessing I didn't get the memo about the award show no longer being about dressing up. It seemed like half the stars just showed up without any interest in their clothes.

And I love GaGa. Even my 4 year loves her. She rocks out in her car seat during every song. It's adorable.

And I love Stevie Nicks. She's one of my favorite musicians. EVER. And Taylor Swift completely butchered that duet.

Carrie Underwood is just gorgeous she is coming to Austin and I missed out on tickets. Did you know she signing the anthem at the Superbowl this weekend.

Oh GAGA- She is AH-MA-ZING! I think because she's odd, entertaining but also has a set of lungs AND can play instruments. I like that in my musical artists....

But I also love Britney. She's my girl- and for some reason I can look past that monstrosity that was her outfit last night. LOL If you focus on her face- she looked beautiful hahah!

As for Taylor Swift- please no one throw things at me- I don't think she can ever sing. I've heard her live in person and on TV and just wasn't impressed. Not saying her songs don't have me singing along, but I really would have chosen Gaga to win the award over her. *sigh* ANYWAYS. My thoughts for tonight :-)

Carrie looked stunning. Lady GaGa is just something else. And Britney was just on another planet, ha!!
And I have to agree, Taylor Swift has a tendency to not sound so good live. She kind of butchered that duet!

I love Carrie! And, I agree - I've been a loyal fan to Britt, but she has got to get it together with her wardrobe choices. She needs a stylist!

i missed the performance...was taylor really that off key?