This is my second day in Savannah. Even if you don't care much to read about it, at least scroll to the bottom to see the CUTE outfit I wore to the party that night:)))

The first whole day I was in Savannah, we lounged poolside for a couple of hours that morning. 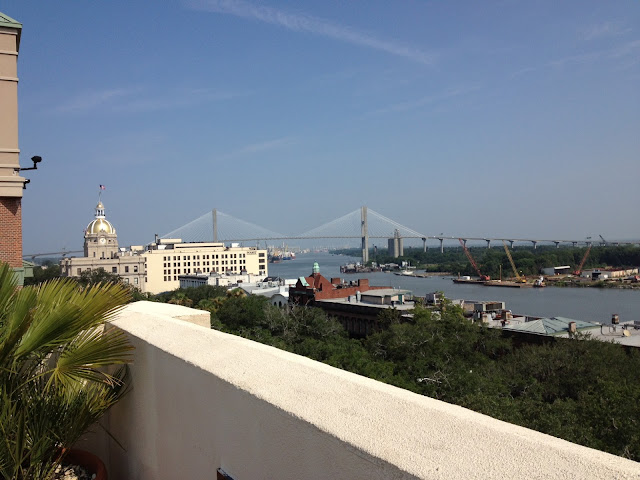 Hampton's pool is on the roof of the hotel. Here's the view from the pool overlooking the river. Lovely!!! 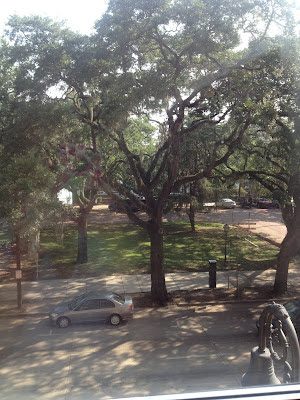 [Sorry for the reflection of my iPhone]
our room faced Bay Street. this was the view from our window

After pool time, LC spent some quality time with his brother while I went to get a mani/pedi and meander around the area. I didn't have a lot of time so I threw on a t-shirt, running shorts, and my tevas. We'll have a discussion about shoes here in the next few posts. They're kind of important. 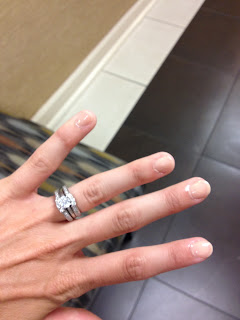 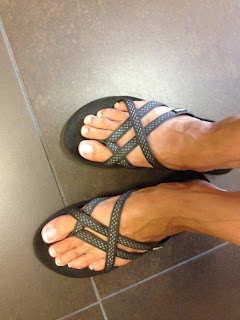 If you're in need of a mani/pedi while in Savannah, I highly recommed Sassy Nails. They are located on Broughton Street and did a great job. My toes at two weeks later still look great. Manis never last that long on me, but still, they were great and inexpensive. For a mani/pedi, it's only $33. Add $5 to that if you want French on your toes like me. 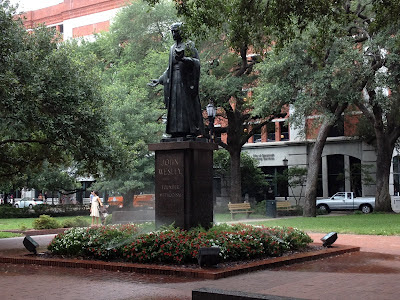 When I was headed to Sassy Nails, one of the infamous Savannah squares was on my path. Usually, there is some kind of marker, statue, something in each square. This is Reynolds Square, and this is a statue of John Wesley. 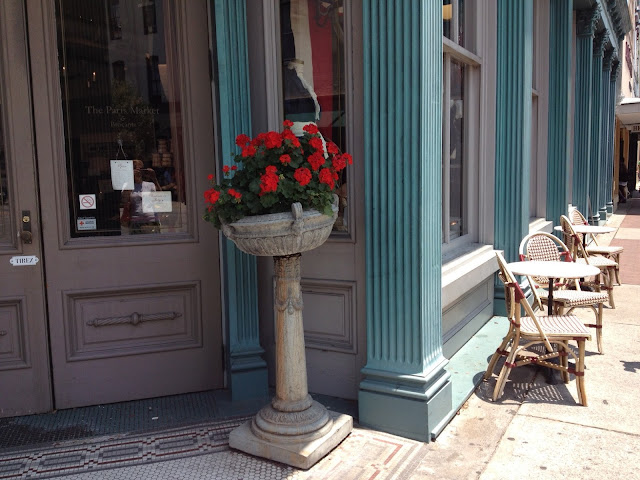 A cute little shop on Broughton is The Paris Market. Even if you don't buy anything, you should def stop by. They have a cute little cafe inside as well. I loved the flowers they had outside the store. 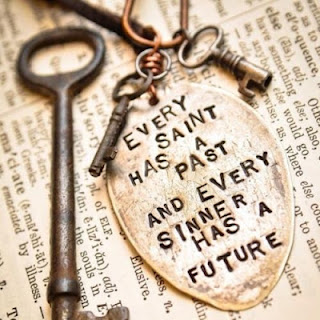 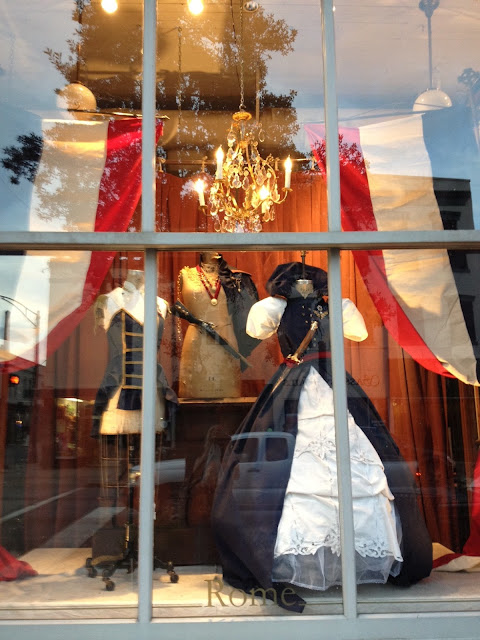 After Paris Market, I went to City Market and shopped around. Make sure you go inside the various shops and check out the goods. I found a couple of art galleries that I ended up going back to where we purchased a couple of pieces of artwork. I ate lunch at Anna's on their patio in CM that day. It was sweltering, and the food wasn't good enough to make sitting in the heat worth it. Anna's is an Italian restaurant in CM, and honestly, I just didn't think it was that good. My French onion soup was very salty; the salad was just okay. Just my opinion. To make up for the lack of good food, I treated myself to another scoop of ice cream from Savannah's Candy Kitchen. Yes, I forgot to tell you...that whole cup I posted yesterday, it's considered one scoop.

Later on that evening, we went to a party at Kevin Barry's thrown for my BIL and SIL for their wedding. Kevin Barry's is an Irish restaurant/pub on River Street. Sadly, I didn't get any pics of the outside. The food they served was good for pub food:) Here's the outfit I wore: 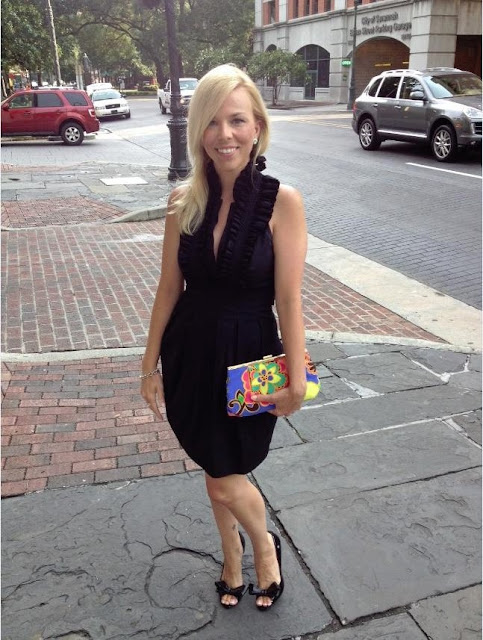 After the party,  hubs, my cousins-in-law [i guess that's what you'd say], and my BIL went to Savannah Smiles for the night and shut it down. I had a ton of fun even though it was a Thursday, and I figure this place is SUPER fun on the weekends. It's a dueling piano bar, and those are always fun!!!!! 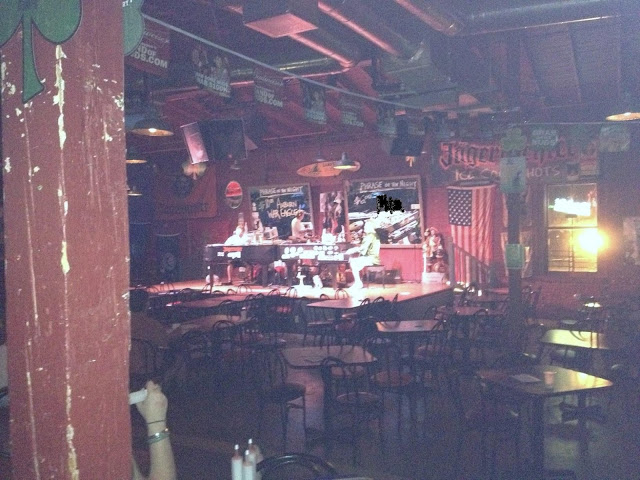 This was towards closing. I think there were only a few other people in there besides us. ha! Yeah, the black mark on the photo is because there's a not so nice word on there and since I'm a teacher, I can't be posting bad words like this one on the interwebz...because even though my personal time should be my own to do and say and post what i please, it's not. then again, it's like that with any public/government type job i presume. however, that's another post in and of itself to which i am not going to open pandora's box about.

Posted by southernbellejm at 7:21 PM

These posts about Savannah make me want to go back so badly! What a beautiful city. I've eaten at Anna's in CM and was unimpressed with their food as well. Love the dress you wore to the party!

Love the outfit! You look darling! I am so jealous of your trip. I want to go to Savannah!

LOVE the Paris Store! They have the best cantalope water. =)

you are making me oh so homesick :( so glad you made it to Savannah Smiles! you're right, it's ridiculous on the weekend but a good time every time!

I need to go to Sassy Nails and I NEED those shoes, gorgeous!! Just lovely, thanks so much for posting your outfits!!:)