For Sunday, we went to brunch in the morning and a little site seeing afterwards. By the way, why do I always stand like this? so unflattering.
Here's what I wore: 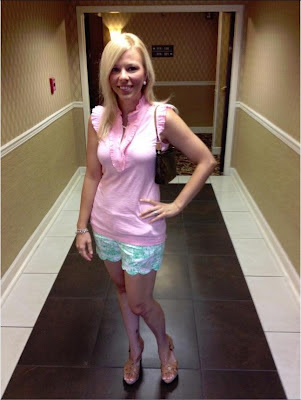 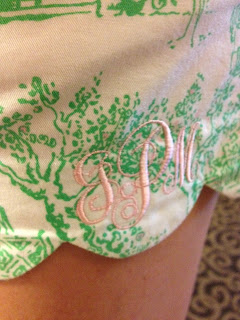 I totally pinned a picture to my "my style" board on pinterest from MCC's Create the Life You Love blog post here where she had taken these exact same shorts as well as a pair of pink/white seersucker shorts monogrammed. I thought how cute and decided to copy her:) Thanks, Melissa!

After we got back from brunch, we decided to go with LC's family to one of the antique stores. I ended up changing shoes into a pair of Kelly & Katie flat sandals I've worn on here before. They aren't brand new so I just didn't think about them being shoes to not wear.  We went to Jere's Antiques on Bay Street. LC's cousin and his wife had been to Savannah before and wanted to go back to this store, and of course, I'm a lover of antiques so I was happy to join along. Just so you know this place is a big store with three floors (if i remember correctly); however, he only really specializes in furniture. No luck finding any Sevres plates for me there! Still, if you love antiques, it was quite fun just perusing around. Afterwards, we stopped in another antique store. I think it was Cobblestone Antiques to look around. They had a ton of stuff in there but nothing I was looking for.

Afterwards, we headed back to City Market. We decided to stop in the various shops. I went back to one of the art galleries I'd visited a few days earlier and purchased a print that I'd been eyeing. The print is by Lynda Potter, and I really, really like it!!! It's hard to read the bottom, but it's the Forsyth fountain. I can't wait to get it custom framed for the house:) 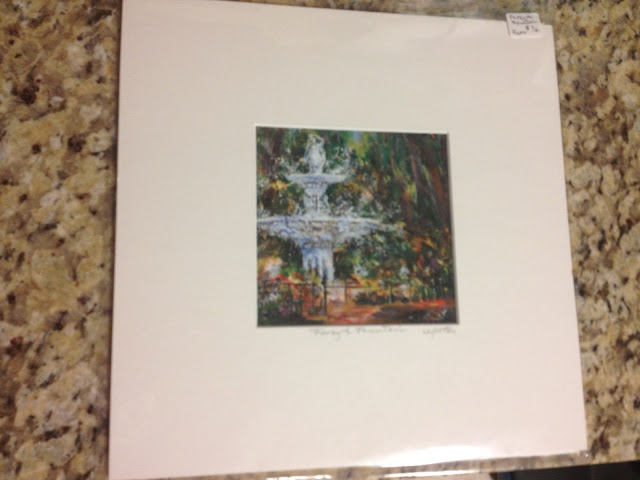 While perusing the shops, I showed LC's family the painting I had been eyeing by a local artist. He uses knives and oils, and I had fallen in love with one of his paintings. Not to mention, he went to the local art school in my hometown. :) They liked it too. Now, I just had to get LC on board...

Before we left CM, we stopped by Ohhhhh, Gelato. The gelato was so yummy just like everything else I'd eaten so far in Savannah. 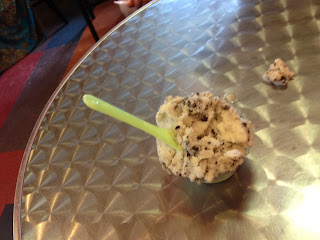 Notice, that's a good portion of gelato (cookies and creme. yum!). That's the kids cup. If you come here, the cup looks really small, but they pack a lot on in it!

Then, LC and his cousins decided to head off for some lunch while we ladies decided to go see some sites. The first place we went to was the Mercer House. If you've read Midnight in the Garden of Good and Evil, then, you know exactly what house I speak of. It's a beautiful house, and sadly, I did not tour it. FYI, you cannot tour the second floor (won't mention why because i don't want to spoil the book;). I would have loved to see some of Jim Williams's collection; however, I just didn't get back around to visiting it. 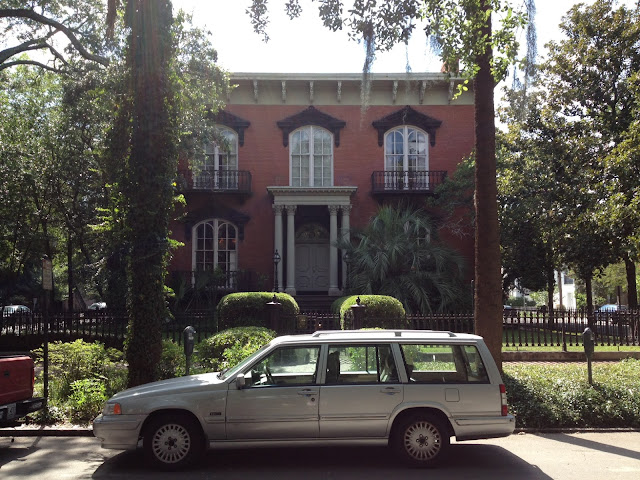 Remember when I said not to judge my tevas in an earlier post, and that shoes will become important? This is about the time I realize that my feet are starting to hurt. I should have gone back to the hotel before we went on our trek of the historic district, but I just didn't think about it at the time. Next, we head to Forsyth Park which isn't very far from this house at all. 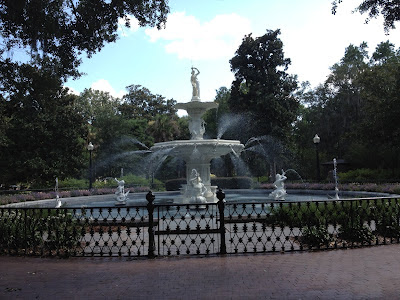 Here's is the infamous fountain in Forsyth. It really is very pretty! I will warn you that if you go around 5ish, bugs will be biting you. One of the locals said they come out about that time; these little bugs are called sand gnats. It was worth seeing the fountain though:))) 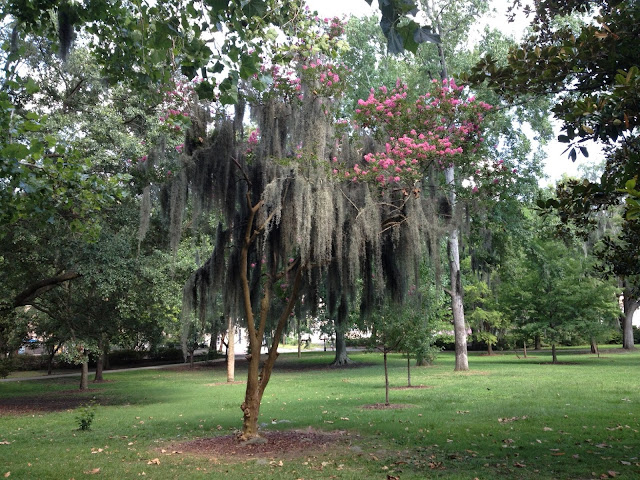 I love love love the moss that hangs off the trees. I thought it was especially beautiful hanging off this crepe myrtle in Forsyth! Next, we headed to St. Paul's Cathedral. My feet are really starting to hurt about now. No support (flat sole with no cushion=no bueno!) 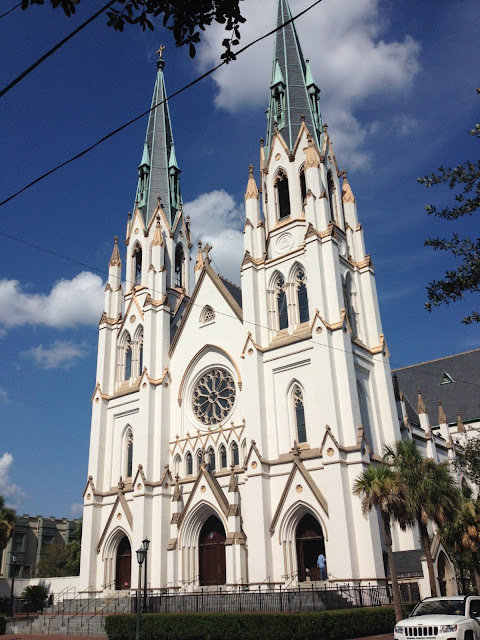 picture of the outside of the cathedral 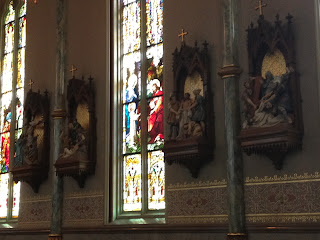 stations of the cross 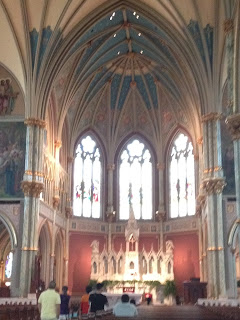 Even if you're not Catholic, I'd still recommend stopping by to look at the cathedral for its architecture, the beautiful stations of the cross, etc. The inside is just breathtaking! Now, my feet are hurting badly. On our way back, we stop on Broughton to check out where LC and I will be staying for our honeymoon:) The Marshall Hotel was great! They had pink lemonade out, and it was refreshing for us on a hot day to go in and sit down for a bit. LC's aunt happened to ask them if they sold any kind of art work of the hotel itself, and she bought us a very pretty print of the hotel. FYI, if you stay here and want a print, they don't have them out or advertise them for sale. We asked and they did...just so you know. I like that it's already matted, and all we need to do is get it framed. 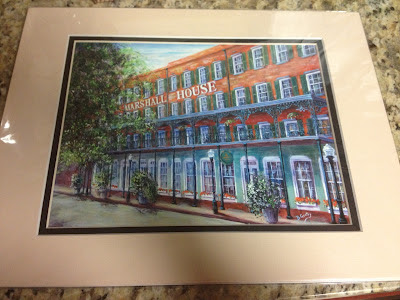 Then, LC's aunt and my MIL headed back to the hotel while my cousin-in-law and I shopped a bit. I didn't take a pic, but the Copper Penny is such a cute boutique. They carry everything from Theory, DVF, to Jack Rogers. Cousin-in-law got this fab DVF lavender/coral color blocked dress that she ended up wearing to dinner. I was good and was saving my money for the next few days. The girls at the Copper Penny were super helpful, and very very nice! I'd recommend stopping in to peruse if you're on Broughton Street. Then, we headed back to the hotel to freshen up for dinner.

When I got back to the hotel, I was SO excited to just take my sandals off. Honestly, I thought my feet were just hurting due to lack of support; however, I was WRONG. Not only were my feet hurting from lack of support, they were hurting because I had gotten these awful blisters at the top of my toe pad up next to my toes. I guess that's where I put the most pressure on my feet when walking and due to the friction, it caused the blisters:(((((( Needless to say, the tevas were worn with everything for the duration of my trip. I didn't care because they were very comfortable. So, it is VERY important to wear tennis shoes or good sandals such as Tevas or Chacos or something of that nature when walking for longer periods of time.

For dinner, we went with LC's family to Garibaldi's. His cousin had eaten here on their previous trip and said it was really good. After dining, I'd have to say I agree! I split the cheese plate as an appetizer with my cousin-in-law, had chicken parmesan for my entree, and creme brulee for dessert! No complaints here:)The cuisine is Italian by the way and is located a street over from City Market. We were there for quite awhile.

Afterwards, we headed back with LC's cousins to City Market. I ended up ordering some pizza to-go from a place recommended to me by one of my blog readers! (thanks girl!!!!). It's called Vinnie Van GoGo's, and it was soooooooooooo good. LC and I ended up eating there again later on in the week! 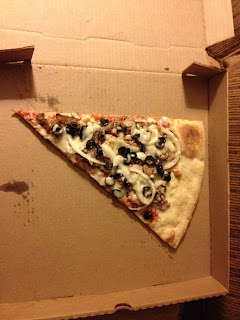 As you can see this slice literally covers half the pizza box. ONE slice!!! I couldn't even finish it. Just wanted to show you for portion sake. ha! Then, in about 2.5 seconds after brushing my teeth, I was deep in slumber.... :)

Posted by southernbellejm at 11:01 PM

You look darling in your monogrammed callahans!! Thanks so much for mentioning me .. so happy to find you and your blog!

You look adorable in your Lilly ensemble! Bummer about your feet, but at least you had something comfortable for the rest of the trip!
Yea, we call those annoying little gnats no-see-ums:)

Yes, I agree! Your outfit is presh!!
Found you through Sarah Beth. Come visit.