I love my little space on the interwebz. It's normally lighthearted, fun, and mostly about clothes and what not on this page. Sometimes though, it's not all pink ponies and rainbows. I keep this blog as an online journal of sorts. It's the one place where I, an English teacher, don't have to proofread. I can write in all lowercase if I want to, just for kicks---which I do quite often:) Also, it's a place I can record things that are important to me. Last year, for Lent, I decided to give up some of my time and visit my grandmother's grave---which I hadn't done is almost 16 years. It was the first time I'd visited her since my parents quit making me go with them shortly after she passed. We were so close that it was just too much to bear. Last year, I went once. It was all I could take.

A lady I met through the blogging universe is helping me with my DAR (Daughters of the American Revolution) application. She emailed me a couple of weeks ago asking for certain documents, and one of those things was a picture of my grandparents' headstones. Their resting place is not too far from where I live, so after visiting with my parents and copying docs, I stopped on the way home on Saturday. I forgot where they lay and wondered aimlessly in the vicinity where they rest. I couldn't go in and ask because it appeared a funeral was happening. And, there I stand crying out of frustration for not being able to find my grandparents. Finally, I found them adjacent to a bench. That will be my landmark from now on. My grandfather's flowers were faded and pink, and grandmother had no flowers at all. My grandfather would not care too much for pink flowers, I tell you!!! Visiting them today was no easier than it was when I was a teen. I don't think it ever gets easier.

I couldn't just let those old, faded flowers remain. My grandparents were good people, they were good to  me, and they deserve better than that. Saturday was hard, and I cried like a baby, I vowed to visit them more often. They would like that. I was always their favorite! :) So, I left went to Hobby Lobby and returned with new, pretty flowers. Peonies are my favorite, and I know they would like them. After I took this pic, I fluffed them up and made them look really nice. I never knew why I found it so hard to visit them or why it seemed such a daunting task last Lent. After doing research on ancestry, I often would wonder who goes to visit my great-grandparents or my great-great grandparents if we don't. No one does, and that makes me sad. Anyways, enough about that. Next post, pink ponies and rainbows. 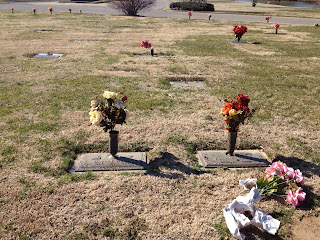 Posted by southernbellejm at 5:16 PM

Where did you find the information for DAR at?

Oh JM! It can definitely be hard to accept the loss of someone we love. I haven't been to my grandmother's grave since her funeral. My family is all buried in MS so it would take 2ish days to get there :(

I can't even tell you how close this hits to home for me. Although the loss of my Memaw is more recent. It was a year this past Christmas. In that year I visited her grave only once. She always kept nice flowers on my Grandfather's grave. I thought I would do the same for her, but I find it's too hard to go back.

I dread the day I lose a grandparent. Mine raised me and are truly more like parents than GP.

And? I have all the paperwork for the DAR and just haven't ever gotten around to submitting an application. J thinks I'm nuts, but I think it would be fun.