Saturday morning I got up and helped LC around the yard. He extended the bed around the maple, and we planted begonias in it. 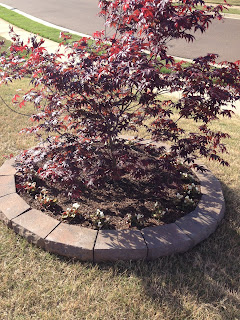 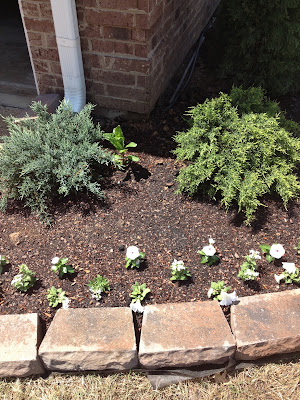 This is our flower bed up against the house. We planted petunias directly behind the stone, a row of verbena, and the back row is vincas. I'm hoping they grow really full! If you look just to the right of the left shrub, you can see a dahlia that's sprouted out already. I can't wait to see what they will look like this year. Last year was the first year they bloomed, so I'm hoping they are fuller and bigger this year. We also planted some more dahlia bulbs and some ranunculus and peonies. I'm really hoping they come up this spring!

Last Saturday after helping in the yard, bff was feeling a little under the weather so her sister and I took her boys out for a little fun. I consider my bff nad her sister to be like my sisters since I'm an only child. Her kids are what I consider nephews. They even call me Aunt Jen;) They had an earth fest type thing at a local park in town, and we thought that would be a good place to take the boys. They those inflatable jumpy things, snow cones, and a petting zoo. They had loads of fun! 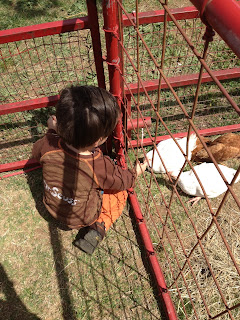 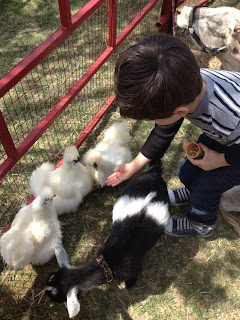 My godson's brother, A, feeding some fuzzy chickens:)

Notice that he's holding a sugar cone full of food. Not too long after this picture, he went over to the camel and was getting some of the food out of the cone so he could feed said camel. Well, the camel decided that it would just rather have the WHOLE sugar cone instead and literally, took it out of his by chomping on it and devouring it. My poor little A just looked at me like did that really just happen. Ha!

Posted by southernbellejm at 4:53 PM