I think things happen for a reason. I think God ALWAYS has a plan. There was a reason why I didn't post the giveaway on Monday, my original intention. I was busy because I had just gotten back in from Hot Springs. I didn't post on Tuesday because I was busy taking care of something I did and got busy "relaxing" on my first official day of summer break. Can one be considered "busy" if they are relaxing, ah I digress. And yesterday, I spent another waste less trip to the pharmacy for a prescription that my doctor still hadn't called in. Seems as if out of the blue my insurance has denied it. A phone call would have been nice, and then again, I guess if I would have called the pharmacy I could have saved the trip. Story of my life...

After last month's disappointing lab work, I just tried again. We got a positive on day 15. I was excited because maybe, just maybe I ovulated. That's around the time most "normal" women ovulate and was hoping the blood work would say so. However, the timing screwed that up. I would need to test Sunday or Monday. All the labs my insurance accepts are closed on Sunday and were closed Monday due to the holiday. C'est la vie, eh? My OB suggested to go ahead and add clomid in addition to my metformin. So, readers, it looks like we're on that route. I am not telling anyone about this right now except for you! and well, my aunts, and my parents. I don't want to hear the OMG what if you have twins, what if you have triplets, what if you twin-trip-quadru-sextuplets???? Ugh, because that's what it will lead to. I guess because infertility isn't so mainstream and women, like myself for awhile, are all too often ashamed that it's just one of those subjects where people have no couth and lack the discipline to filter the hurtful remarks and questions that come out of their mouths because they are uneducated or inexperienced with fertility issues. If I end up having twins or triplets, well, the way I look at it is that it's more than I have right now.

So, I posted the swimsuit giveaway on Wednesday. That day came a comment which led to me lurking on said commenter's blog (Thanks, Catherine!) to reading a post that I totally just got. And, I was calm. I think this little getaway helped and the fact that school has settled has helped. I am hoping that if someone who is in my shoes comes across this post that it will give them solace too...and that if someone who is friend/related to someone with infertility that this post will help them be able to communicated better with their loved one. 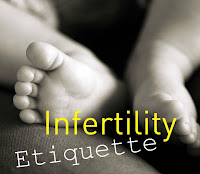 Credit story and picture: Jessah at Dreaming of Dimples

Posted by southernbellejm at 11:00 AM

I'm really glad that you found that post and that you are putting it back out there. In my experience this journey is the hardest one I've come across, especially because it's disappointment month after month, but we are strong! We should rejoice in our strength and the courage it takes to never give up!

Thank you for sharing this. I am currently pregnant, and my best friend is struggling with secondary infertility. Trying to be there for her while enjoying this time in my life is tough, and I'm so thankful to see that most of what I'm doing is on the right track in terms of supporting her.

Keep us updated, and thank you for sharing your experience.

Hi, I came here via Lori's blog (A Time For Everything), and I do not want to invade your privacy; however, I wanted to let you know that there is a saliva test that detects ovulation and you can do it yourself instead of going to the lab (and it is a one-time cost). When I did this I used a little vial thingy (technical term LOL) and it had a light and magnified the saliva once it was dry it looked like a fern and that meant ovulation. Although I am a few years removed from this process (having since been blessed with twin girls adopted from China) I understand your struggle. I have linked the sites for the saliva testing (not sure what the Lifesaver is like, but looked interesting.

This one is similar to the one I used, but I got mine at Rite-Aid which is a drug store where I lived (if you don't have those).

This one is called fertile focus and is like the one i used:

I wish you peace on your journey and hope you will soon find your way to motherhood.

Yes, yes, yes! Thank you so much for putting this out there.

It's sucks not fully understanding God's plan for us. But we can find peace in knowing he does know what is best, even if we don't know what that is. We've been trying to conceive for 2 1/2 years and are in the middle of our first IVF cycle. I'll keep you in my prayers.