I'm going to the DAR state convention the first weekend in April.in Nashville. I decided to do this because I'd like to see some behind the scenes of the organization I joined this summer, and also, I'd like to do something fun for myself before we start the IVF process which should be mid-April.

I have to have all white dresses: 2 Sunday church type dresses and 2 formal dresses. I've been lucky as another blogger sold me two dresses at an amazing price ($90 for both!), and I also have a backup. However, I have been dreading looking for the formal ones. The problem is I keep finding them with other colors and not just white and/or they look like a wedding dress. Grrrrrr!

Then, the other day I had the grand idea to look on fleabay. Well, I found a one, and it was ONLY 33 dollars! However, the catch is that it's coming straight from China. I really hope that 1) it fits and 2) it actually looks like the picture. I figure if it doesn't work, I can always donate it to the JL thrift store. But IF it does work, 33 dollars is a lot better than say 100.

I thought it was pretty. Here's a pic: 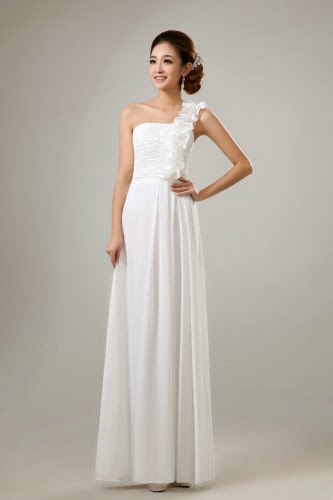 Posted by southernbellejm at 10:18 AM

My little sister's BFF ordered her prom dress from China last year & it looked AMAZING! Hoping you have similar luck because that white dress is gorgeous!

I ordered the wrap for my wedding from China!! It was slightly too small the first time so I had to buy it twice at around $45... but I'll take that over the $300 store version any day.