On Tuesday, we really didn't do very much. We had to take LC's parents to Jacksonville for their flight. We slept in, ate lunch with them, and dropped them off. Then, it was another 2 hour trip back to Savannah.

When we got back, LC napped while I walked around City Market. I went to visit the painting I wanted again. It was still just as pretty as the first time I saw it! I had some of that yummy ice cream from Savannah's Candy Kitchen and i wonder why i gained like 3 lbs in a week and a half!

By the time I got back, it was time to shower and figure out where we would head for dinner. We just took our time playing chess and enjoying wine and cheese hour. Then, we decided on Moon River Brewery for dinner. If you're on a budget, they do have coupons on restaurant.com for MRB, and if you pick up an Old Town Trolley Map pamphlet, there's a coupon in there too--FYI.

We had the leek and goat cheese cakes. DELISH! sorry no pic. totally yummy!!!
For dinner, I just went with an appetizer and a side. I had the philly cheese sliders and the gruyere scalloped potatoes. So good! 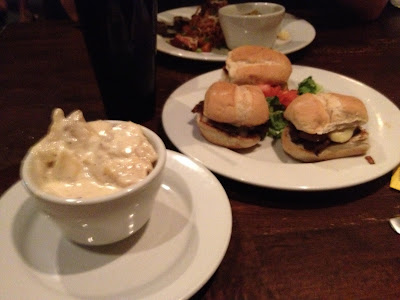 On Wednesday, we did the Walk Through Midnight tour. I really, really loved the book Midnight in the Garden of Good and Evil so this was fun for me! Our guide told us lots of inside info about the people (i won't spoil it--if you want to know, just email me), and we got to see places from the book such as the Mercer House, where John Berendt stayed while writing the book, one of Joe Odom's places, etc. It was nice to put a place with a name! While on this, part of Monterrey Square to the side of Mercer House was blocked off because they were preparing for an Express fashion show. I noticed this the day before, but I thought they were setting up for a movie. Nope, just a clothing show. 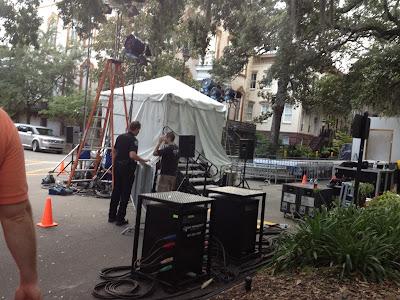 Later on that night, we had dinner at Vinnie Van GoGo's in City Market. The slices are HUGE, only order one! It was delish. Then we headed to meet our group and tour guide at McDonough's Pub for our boos and brews ghost tour. 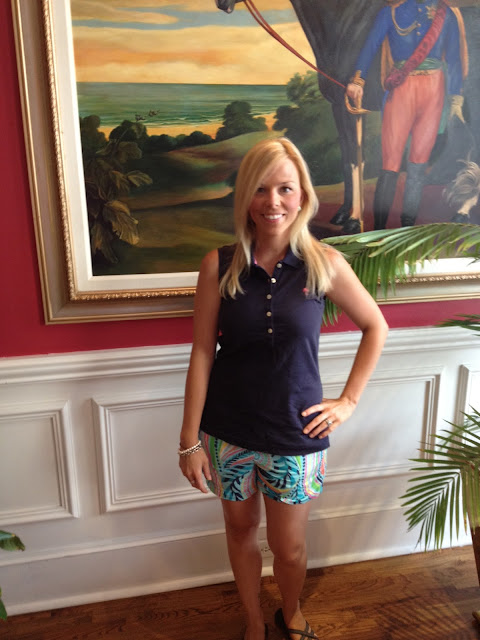 The ghost tour we went on took us to a few haunted places and a few haunted bars. It was neat to learn about the history of the ghosts in Savannah as well as enjoying some tasty bevvies. One thing I did learn was that often you see old houses with the inside of the roof of a porch painted a haint blue. In old times, it was said that the haint blue kept evil spirits from entering this realm.
Here's a pic from Colonial Park Cemetery. We didn't go through this (will do next time), but it's not a working cemetery anymore. Our guide explained that Sherman's troops set up camp and used the headstones as target practice. There is a row of headstones against one of the walls of the cemetery, and he explained that when they picked up the headstones the troops had used they weren't exactly sure where to put them back so along the wall they went.
Here's a couple of pics of the entrance: 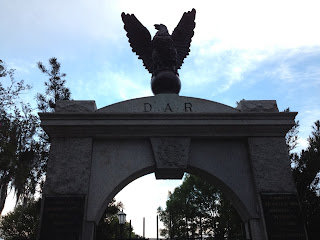 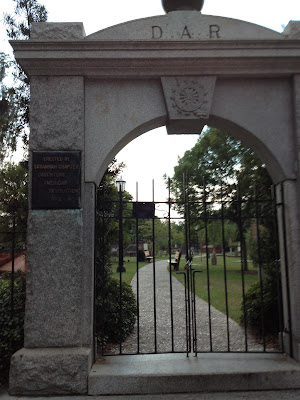 According to the sign, the DAR of Savannah erected this entrance in 1913. (btw, i'm hoping to get into the DAR, i've been tracing my lineage and it seems some of my past ancestors were members. i have a wonderful lady helping me---hoping my ancestry work is correct so i can join. little tidbit about me:)

Another stop was outside of our hotel. The guide said often guests thank the staff for the people walking around in "period costumes" making it fun to stay there. Nope, no staff dresses up; it's ghosts. No, we didn't see any during our stay. We stopped in a club across the street from our hotel because our guide knew the owner. It seemed really Euro to me and wasn't too busy for a Wednesday night; however, when we passed by Friday night, this place was bumpin'. Sorry, don't remember the name. 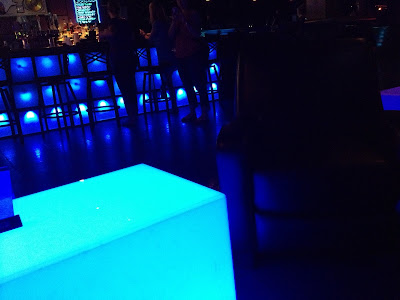 The tour we went on is run by a local lady whose family has lived in Savannah for quite a few generations. I really liked the fact it wasn't kiddy-ish with actors and what not like some of the tours I'd researched. We also saw other tour groups on the same path as us so maybe, they all stop at the local haunts...

Posted by southernbellejm at 2:20 PM