Sorry for the lack of posting, but I've been trying to get my classroom organized.

This was the second Thursday we were in Savannah. We got up and ventured out to Bonaventure Cemetery. This is one of the places you actually need a car to get to. With that being said, it's totally worth the drive. It's breathtaking. The stones are beautiful and the hanging moss just completes the whole scenery. It's something inconceivable unless you actually go there in person. 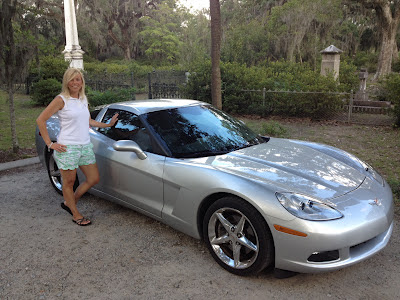 cheesy, i know! don't judge. this is our rental car. needless to say, i wouldn't actually like to own one of these. they sit very low to ground so i heard a lot of traffic noise, and it's not the easiest vehicle to make a "ladylike" exit from. This was taken at Bonaventure. 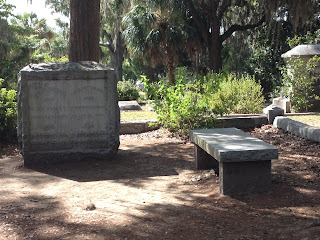 If you've read Midnight in the Garden of Good and Evil, this is Conrad Aiken's grave where Berendt is taken, and they sit and have martinis.

FYI, if you're going only to look at the *bird*girl*statue, she is no longer located in Bonaventure. She has been placed at the Telfair Museum of Art (btw, you cannot take a camera in the museum to get a picture of her)

After returning from Bonaventure, my husband spotted Zunzi's on a side street close to our hotel. My hubs is an amazing cook, loves to watch Food Network, etc. Evidently, this place was on the top ten list of something on the Food Network for sandwiches in the US. I had part of the sandwich. It was good. Top ten in my book? Nah. However, definitely worth trying. Btw, it's to-go only.

After lunch, I finally convinced my husband to go with me to City Market to look at the *Bird*Girl painting I had my eye on. I thought it would be the perfect piece to commemorate our honeymoon not to mention something we could pass down to our children. Luckily, I won him over, and he bought her. I absolutely LOVE her. I think she almost looks as if she's floating out of the picture. The artist said he wanted to paint her in Bonaventure so he headed out there one day to see what her natural home looked like. He painted her with a ton of azaleas in Bonaventure. I LOVE IT! 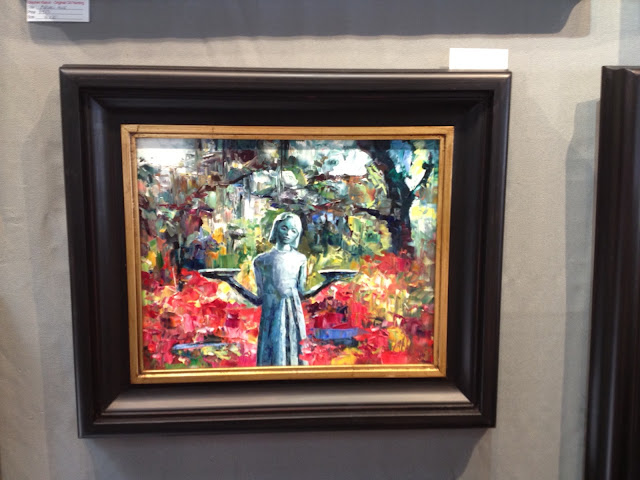 The artist's name is Stephen Kasun. It was neat because he is actually painting while you visit his shop. While perusing one day, he was in the middle of a harbor type sunset painting. He said a couple had admired one of his paintings at one of the local restaurants, and the owner gave them his name. He ended up still having the photograph he used to paint the picture and was recreating the painting for them. He is very nice!!!! Also, I brought the prints we had gotten on our trip and asked them if he could mail them along with painting because we were afraid they'd get damaged on the plane. I was fully expecting to pay to ship the prints since they were not his, but he didn't charge us to ship it with the painting. I highly recommend at least visiting his studio inside City Market!

Afterwards, we boarded the trolley at CM. We chose to do Old Town Trolley because the stops were closer to some of the things we wanted to do that day. Our first stop was Forsyth Park. LC hadn't been there, and I wanted him to see it. 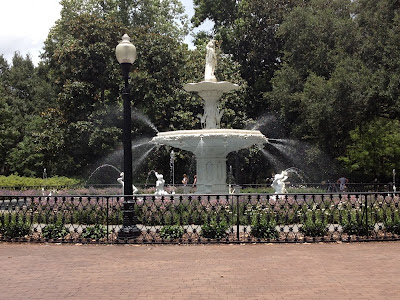 This is a pic from the side because Express had taken over the front of Forsyth fountain. I was hoping to get a photo of me and the hubs in front but no can do. They were doing a photo shoot there that day. 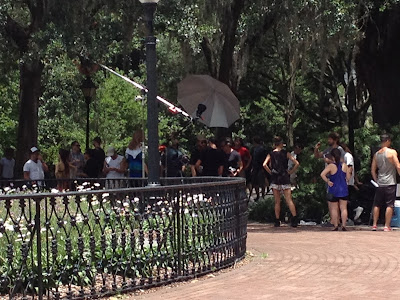 Here you can see they totally took over the front:( If you look right by the pole the tall person with the white fabric draped across her back/neck is the model. She was tall and SO skinny. And just so you know that's not fabric. It was so hot that day that that is actually a damp paper towel. I wonder if they were shooting fall because she had on jeans and I think that was a long sleeve or 3/4 sleeve top. Glad I wasn't her because the heat was already miserable not to mention being miserable wearing fall clothes in 100 degree heat.

While on the trolley, this nice lady posed for me! We didn't go to this house, but I thought she looked cute all dressed up in period clothing! 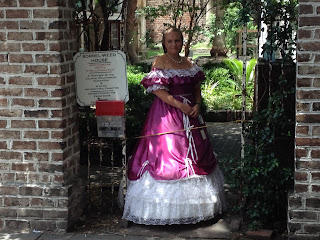 Next  stop on the trolley was St. Paul's Cathedral. I told LC it was a MUST SEE. It was so pretty. I happened to catch a picture of the bottom of the baptismal font while I was there. Very pretty! 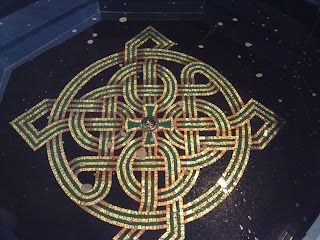 After our stop at St. Paul's, we headed over to the Owens-Thomas house. I am so glad this is the one historic home we decided to visit. Fun fact, this house had indoor plumbing before the White House! Sadly, we were not allowed to take any pictures. I definitely recommend!

After we left the Owens-Thomas house, our next stop was to the Telfair Museum of Art. I really wanted to see the Bird Girl in person because I have loved that cover for SO long. She was very pretty, and I really enjoyed the art they had on display. It's three levels. The bottom level has replicas of statues mostly from Europe but very pretty! Again, don't bother taking out your camera or bringing it because you cannot take pictures.
**FYI, if  you want to visit the Owens-Thomas House and the museum, I suggest buying this package. If you notice, the child's ticket says K-college. I called and the only verification they need with your id when you bring the e-ticket with you is your college id. I still had mine and so did LC. So this only cost 10 bucks for the both of us to go. Just a little hint if you're on a budget:)

Later on, we headed to Paula Deen's for dinner. I, at least, wanted to try it this time while we were in Savannah. Next time we go, I'll pass, but it was good to go there at least once. 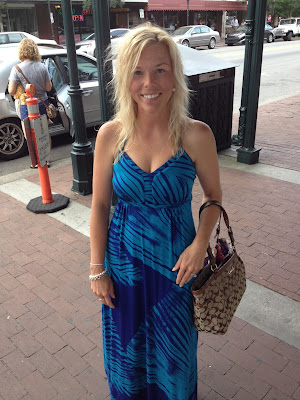 Here I am with minimal makeup in all my glory. Ha! Originally, I picked up this dress last year because I figured we'd go somewhere tropical (i love the beach!) for our honeymoon and thought this maxi would be perfecto. Well, honeymoon to the beach just didn't work out that way, but I brought it along anyway. It's from Express and will get some use when we go to the beach in a few weeks. Yay!

Outside PD's, they were filming a movie. The movie is set back during the time when the club CBGB's was in its prime. It was neat to see it happening and how they transformed the street. They had a fake garbage can with fake trash, etc. Kinda cool. Also, they covered up the original awning with this CBGB one. 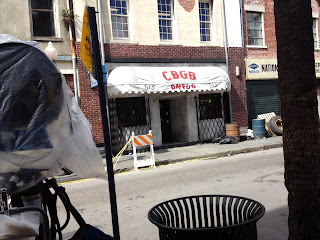 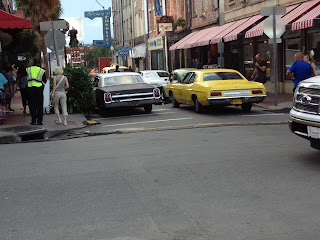 FYI, PD's takes reservations now, and I highly suggest making one. We ended up only waiting about 5-10 minutes waiting before being seated since we'd made the res.

We both ordered the buffet from PD's which actually if I remember correctly ended up being the cheapest thing on the menu. We both thought it was good, not good for you, but good as in taste. However, we're southern and this is the kind of food we were raised on. You northerners will LOVE it! 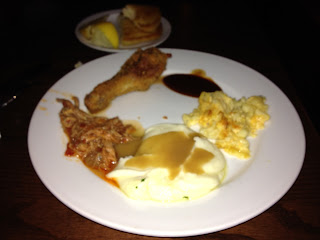 This is not the most beautiful pic. Ha! They give you a cheesy biscuit and a hoecake to start off. Both were YUM! I don't even want to know how much butter was in either. Here's an example of what they serve. I had fried chicken, bbq, mashed potatoes with gravy, and macaroni and cheese from the buffet. Also, the buffet comes with a complimentary dessert; I chose Paula's butter cake. Goodness, it was so so so so good. I bet that one tiny piece had a gazillion calories in it. Oh well, I was on my honeymoon....
Andddddddddd, I'm still trying to lose the 3-5 lbs I gained while on my honeymoon. I was busy before we left and didn't eat that well, obvs from the picture above you can tell I didn't give a darn about eating healthy while we were there, and when we returned---off the wagon fa' sho. Now, I'm trying to get this weight back off so that my clothes fit normally. ha!

The next post will conclude my Savannah trip. Hopefully, it won't take me another week to get that up. Ha!

Posted by southernbellejm at 10:34 PM

Cute dress!
Thanks for sharing your cemetery tour! I love going to cemetery's, just to look around it puts life into perspective sometimes!
= )

Savannah is an amazing little city! I love it there : )

Absolutely love the painting. Btw, I have a dirty little secret... I've never ready Midnight in the Garden of Good and Evil. Don't judge! It is on my list.