Sorry for the delay of posts. Thursday night was spent on parent-teacher conferences. Last night, my bff and I went to my JL's holiday market, Merry Marketplace, for Girls Night Out. It was so much fun. GNO has live entertainment, wine and champs, and food. Some of the best restaurants in town had participated. Yum Yum! I think the decor this year was SO SO cute. I don't know who did it, but I liked it:) 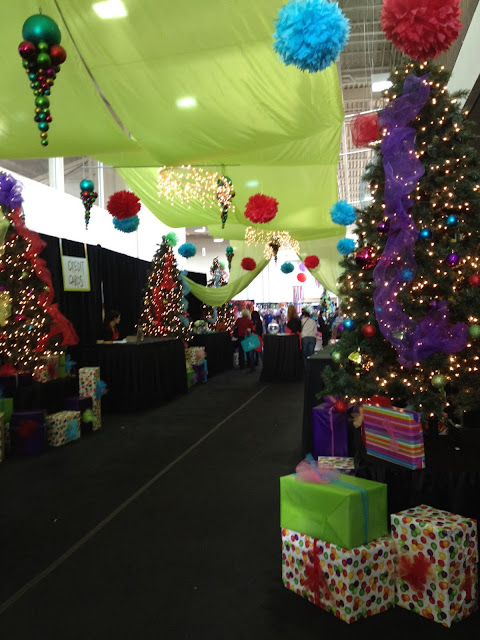 While there I was delighted to see a little booth selling macarons. 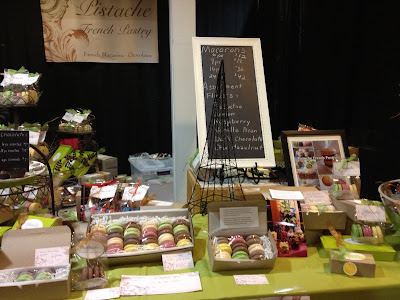 I always see Monograms and Manicures tweeting pics or blogging about them, but I'd never tried them. I never see them in my town (maybe, i'm not going to the right places!), so I decided I would try them. OH MY WORD! They are the best little cookie I think I've ever had. I'm officially hooked! Thanks, Hopsy:)))) I bought two packages, one was a two pack and the other a three. By the end of the night after some wine-age, I devoured the two pack before I even left. Since LC was out of town for the night, I was watching my soap operas in bed and fighting an inner battle of whether or not to demolish the last three whilst watching said Bold and the Beautiful. Luckily, the wine-age was wearing off and my food conscience reminded me of what a good little breakfast these babies would be at my Merry Marketplace shift in the morning. And yes, they were the perfect breakfast meal while selling cookbooks to shopping patrons! Here's what my breakfast looked like (perfect for an election party, btw.) 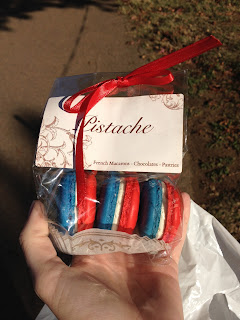 My friend, the publications chair, who was working the JLM cookbooks table with me thought they looked pretty yummy. She went and bought some and now she's hooked. After my shift, I picked up a six pack of chocolate ones and got two free vanilla ones. The two free vanillas were devoured immediately after purchase. Then, I ate two chocolate on the way home. Ummm, yeah. Maybe, I need to join macaron anonymous:)

Btw, look at this cute sign that was in one of the aisles last night. 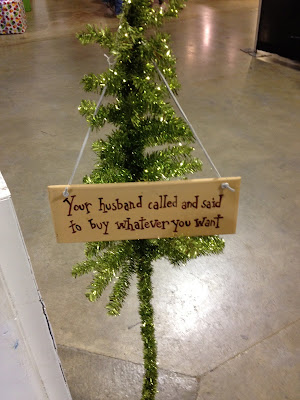 I texted this picture to LC. He responded in capital letters with NO. I do believe he was shouting at me via text. Ha!

Posted by southernbellejm at 6:16 PM

This looks like so much fun! I wish they had something like this in Vancouver! Can't wait for the holidays!

I always see Macaroons too! Now I guess it's time to try some! They always look yummy!